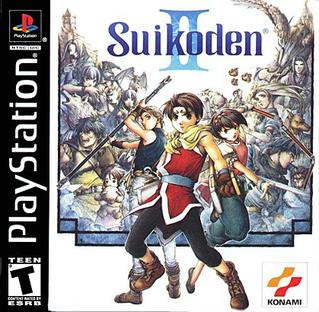 This won’t be a new segment of my blog but instead more of a retrospect on video gaming with me. For this particular post I’m going with a hard to find classic in JRPGs, from 1999, and one of my favorites; Suikoden II!

The Suikoden series is based on Water Margin from Chinese folklore and turned into a video game in the mid 1990’s, Suikoden, and it went up head to head with Final Fantasy 7 and lost in sales but the story had fans hooked. The second installment delivered again on story and depth. Let’s check it out:

Suikoden II picks up where the first game left off, just three years later and with a different protagonist and in a different nation. It does pick up where the first left off because you are encouraged to load your save data from the first game and doing so will enhance and impact this game. Your character, named by you and henceforth for this blog named the MC, will travel the land after a sudden betrayal and being framed for treason, gathering allies to stop a mad man in the form of Prince Luca Blight of Highland. Seems like they wanted to go with Loco and they probably should have because this dude is nuts.

You start off with the usual getting to know the game system with some minor side quests. These help set up a few story lines and at the beginning you find yourself in a trio of the MC, your sister Nanami and your best “friend” Jowy Atreides (seeing the naming pattern?). Familiar faces return first in Vickor and Flick, followed by Apple (the annoying student from #1 that’s now on her own) and a few others join up as the game progresses.

To keep this concise, the story flows rather well with the usual high fantasy setting of a world with magic and fanciful creatures. There be dragons! Well, there is one but he’s a little hatchling but the third game really brings out the dragons. There is an obvious good verses evil but then that gets muddled when you discover that good and evil may not always be so obvious.

As you get the idea that your goal is to stop Luca and his henchmen, your are thrust into a battle with an ancient vampire, Neclord returns, and you have to find a way to bring the City States of Jowston together. There is a lot of distension in the land and none of the leaders really agree so it’s up to you to unite them. This means exposing corruption, brings together different races and healing old wounds. This is a lot to ask of one person. In the end, the combined forces and allies should be enough to fight back the highland invasion led by Luca and then a surprise antagonist. (Did you see the quotes up near the top?)

Okay so let’s get down to some of the details of the games. This game, for its time, was massive. A good 80 hours worth of game play. Side quests, minigames that had a point (A freaking cooking competition!), minigames that didn’t have a point and musical numbers! You have a castle to house all of these fun activities in and in that castle you can create a sculpture based on pieces that you find throughout the world. There is a trading post in every area so you can make a fortune or lose it all if you suck at business. To recruit one ally you need to make $50,000. Just like in other games you are sent out to find hammers for your blacksmith to enhance your weapons and all your companions. Oh yea, did I mention the 108 Stars of Destiny? You recruit 107 allies!!!!!

The whole point is to gather 108 Stars of Destiny so you can have the strength to succeed, have the best ending (one of the first games with multiple endings dependent on game play) and to be able to upload for future games! You also get to expand and improve your castle based on the number of stars you recruit at given intervals.

For the high fantasy setting, we also get to experience magic but it’s in the use of runes. These runes are attached onto the body (3 at the most in this game) and as the player levels up the runes grant more magical powers. These spells all get cut scenes that range from simple to “holy crap that’s cinematic!” Many have cool names too like: Forgiver Sigh (Bright Shield Rune), Empty Palace (Blue Gate Rune)or Silent Afterglow (Twilight Rune). These can be powerful and some enemies will be harmed more than others depending on the spell or the spells, once at level 4, can combine! This happens with level 4 elemental spells; Fire, Earth, Wind, Water and Lightning. All of this in a beautiful and colorful artistry that showcases some of the best 2D graphics from the PSX era.

Lastly, Suikoden II fully incorporates some of the best music in the entire series and arguably in any video game. RPGs, long known for great story-telling and music, is perfectly exemplified in this game. Long days I spent with friends listening to the music and guessing where the song was used, not that it was that difficult.

While the game is near perfect I’d say that looking at it with modern eyes shows that the one thing that would make the game just a bit better would be a more immersive decision system but even that is present, just not as advanced as it is now.